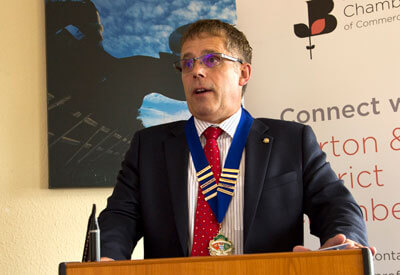 AGM at Let’s Do Business Expo at Uttoxeter racecourse proved to be a master stroke for the Chamber.

Burton and District Chamber of Commerce held its Annual General Meeting (AGM) at Uttoxeter Racecourse on Thursday 23 June 2016. President Simon Chapman, Managing Director of Yee Group Limited, reported on the continuing success of the Chamber with its current expansion and powerful voice for all businesses in East Staffordshire.

The AGM formed part of the Chamber’s increasingly successful Let’s Do Business Expo at the Racecourse that was attended by 1,200 visitors making it the largest event ever held by the Chamber for members and their guests. The Exhibition has grown in its importance to the business community year-on-year over the past three years, attracting visitors from across the West Midlands.

“Growing the ‘voice of Burton’ across the region is clearly exemplified by this exhibition”, pointed out Chamber President Simon Chapman. “It has become the highlight of the business and commerce calendar for many companies. By expanding the Expo, we have made it ‘a fantastic showcase for every business’. The addition of our Keynote Speakers raised the level of interest and involvement for all the visitors”.

The proceedings of the AGM again confirmed that local businesses are continuing to develop a strong reputation across the West Midlands. Winning major Annual Awards provides continuing evidence of the competitive strength of this important part of Staffordshire.

“Our Chamber is building on its successful integration with the Birmingham Chamber Group where we now play a key role”, continued Simon Chapman.

“We are seeing the fruits of those labours with growing exposure and competitive advantages for our businesses – large and small – in the West Midlands. This is now being translated into closer relationships with Staffordshire Chambers and with the Local Enterprise Partnerships (LEPs).

“Their success in winning new funding for business support and promotion is another important part of the Chamber’s ongoing programme targeted at expanding the prospects and opportunities for local companies”.

Over the past 12-months, membership of the Chamber has continued to grow with the President’s personal target of gaining new members in sectors that are either not represented, or where there is currently very little representation, well on the way to being realised.

“Back in January, our Executive Director, Chris Plant, reported to the Chamber Council that ‘a total of 1,410 businesses across Staffordshire are now members of our Chambers, equating to a 10 per cent increase in the last year”, added Simon Chapman.

“Breaking through the 1,400 mark was a major milestone; and enables businesses joining the Chambers to enter an expanding network of likeminded people who they can connect with, work and share knowledge”.

The fact that this Chamber’s membership is now comprised of an ever expanding range of businesses from different sectors and industries provides another excellent illustration of the growing importance of this local business organisation.

“It has been a turbulent year both economically and politically; but, I believe that the Chamber and the businesses it represents have navigated it rather well”, added Simon Chapman in summary.