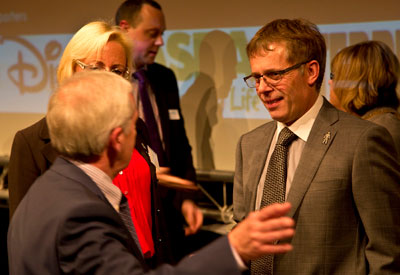 Burton and District’s Chamber of Commerce AGM at Hoar Cross Hall, attended by 75 members and their guests, on Thursday 21 May, saw Simon Chapman, Managing Director of Yee Group take up his new role as the Chamber’s President.

Mr Chapman from the award-winning business, takes over this important role representing the local business community from Chris Else of Else Solicitors, who has held the position for the past two years.

“Our Chamber continues to grow from strength to strength and has become a powerful voice for all businesses in Burton and District”, said Simon Chapman.

“Chris Else took this Chamber through its successful integration into the Birmingham Chamber Group, where we now play a key role. Burton businesses have gained a strong reputation across the West Midlands and continue to win major Annual Awards showing growing evidence of our competitive strength in the region.

“Our members are increasingly recognised and our views sought on a wide range of topics in the areas of finance, the economy and commerce – all subjects that potentially affect every business in East Staffordshire and where nationally Chambers of Commerce are having a greater say and positive impact”.

Chamber Networking across Burton has expanded during Chris Else’s term as President with its Business Lunches. The monthly events calendar has broadened the Chamber’s appeal to growing numbers of representatives from East Staffordshire’s expanding business community.

“My plans are to continue building on the role and reach of this Chamber”, continued Simon Chapman.

“Over the coming two years, my aims are to retain the existing membership by ensuring we offer products and services that they need; and to also recruit 50 new members. I want to ensure we gain members in business sectors that are either not represented, or where there is currently very little representation, within the Chamber”.
The continued achievements of Burton’s SME business community, reflects the growing awareness by many, of the quality and skills of ‘local entrepreneurs’ in East Staffordshire. The Chamber has consistently been at the forefront in supporting these businesses and representing their interests at regional and national levels.
The new President plans to further develop the Chamber’s role and influence in all areas of activity where it can support and improve commercial opportunities for the wider business community.

“I am planning on working with the Institute of Asian Businesses to encourage more of their businesses to join our Chamber and increase the proportion of them in our membership”, Mr Chapman remarked.

“In the final strand of my three part plan, I want to create and roll out a Patronage offering that will help to further expand our Chamber and offer new, additional services to members”.

The closer relationships fostered with Birmingham and North Staffordshire in the last 12 months have taken the Burton Chamber to a new level of importance and relevance in the local communities.

Growing the ‘voice of Burton’ across the region is exemplified by the success of the Chamber’s second ‘Let’s Do Business’ exhibition at Uttoxeter Racecourse next month, where all the exhibition space has already been sold.

The official business of the AGM successfully completed, delegates joined a drinks reception sponsored by the new President and his company, Yee Group.

Over lunch, Chamber members and their guests celebrated the appointment of the Simon Chapman as their President and were entertained by Ben Robinson, BEM, Chairman of Burton Albion FC, who talked about the ups and downs of  ‘running a football club’ including a potential revolt by the first-team