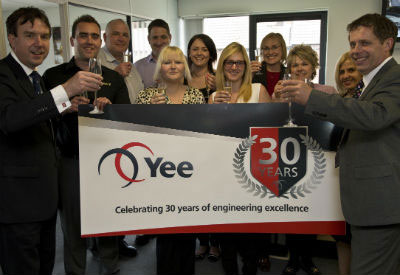 Burton’s Yee Group celebrated its 30th anniversary on Tuesday 28 April 2015 with a visit from the town’s MP Andrew Griffiths. The business, founded by Simon Chapman in 1985, has successfully grown from its early beginnings as a start-up electrical company and now employs some 30+ locally-recruited engineers, technicians and staff.

“Our expansion over those 30 years has seen the business outgrow two sets of offices”, said Mr Chapman, “And, we are now settled in Granary House on Wetmore Road”.

Careful diversification from electrical and security contracts for larger local companies in Burton and District into air conditioning has made a major contribution to the contractor’s continuing successes.

“It’s a bit of a cliché but our focus on providing excellent service and really  listening to customers has made us a multitalented team at Yee”, continued Simon Chapman, “we have been very successful at identifying new sectors like air conditioning, and then launching a comprehensive service tailored to the market”.

The continuing successes of Yee Group were recognised in the inaugural Burton Mail Business Awards where the company won Small Business of the Year; and then followed that achievement with major awards in subsequent years.

MP Andrew Griffiths, said, “Yee Group is one of Burton’s flagship companies showing the strength of their skills and expertise in winning major contracts from household names like Harvey Nicholls, Vodafone and Deutsche Bank; as well as significant businesses in the East and West Midlands.”

“The company has now further consolidated its position with the introduction of its single point of supply for air conditioning, electrical contracting, fire alarms and security systems. Through this innovation, Yee delivers complete systems and takes responsibility from the initial specification to final commissioning”.

Yee staff, who have made major contributions to the success of the company over the past 30 years, joined Andrew Griffiths in the celebrations marking this important landmark. The innovative business is now planning the next stages of its continued expansion.